Out of 34 businesses; 28 of them published their values on their website. And of the 28, here’s a list of the most popular values: 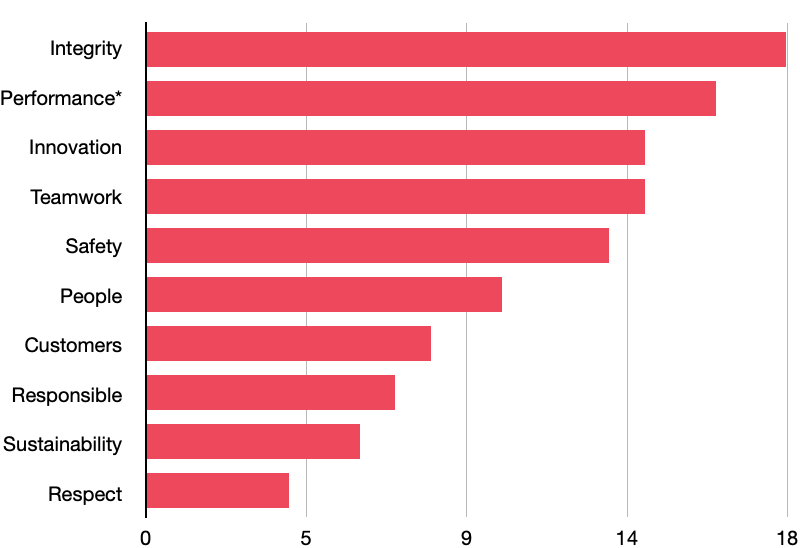 *This is an aggregation of similar statements about performance in general

Now - if you managed to read to the bottom of that list without falling asleep, then you’ll probably agree that it’s an incredibly uninteresting and unengaging list of generic terms. They’re not differentiating in any way. They’re McValues: performing a role and filling a gap but offering nothing substantial.

They feel like something that’s been bought cheaply - a low engagement activity - more so to tick a box rather than to really engage. And that would be fine - arguably sensible - if they were then quietly dropped or forgotten about, but that’s not the case. Quite often they’re emblazoned across the homepage in a headline, or cherry picked by the CEO in an annual report. So, you get the feeling that they’re deemed to be important, which just underlines the question for me in a big red pen: why are they so crap?

This raised a whole raft of questions for me. The first was obvious. If these are so shit, what does not shit look like?

What makes a meaningful value?

For me, the first thing we need to do here is distinguish between ‘characteristics’ and ‘values’.  I think of them as very different things and in researching why, I found two good definitions that help to explain why. (I can’t remember where they came from…). It said that Characteristics were ’descriptive’ variables and that Values were ‘motivational’ variables. For me this nicely frames the difference between a series of characteristics that describe a person or business (e.g., funny, serious or professional) versus the deeper value-based variables that describe what motivates a person or business (e.g. loyalty, altruism or humility).

I think many businesses get stuck in the rut of claiming characteristics as values - calling out generic descriptors that we should really take for granted in a business. I mean, I expect the brands and businesses I deal with to have integrity, and to focus on their performance, and take an innovative approach, whilst focusing on people, customers and safety. You wouldn’t have a business without focusing on these things. They’re important, but they’re common to every business.

Phil Adams (a brand strategist) wrote an excellent blog piece recently about this very issue. In the article Chimps and Champs, he talks about the fact that humans and chimps share 99% of genes; but it’s the 1% that differentiates. It’s a great analogy to brands which, he argues, work in a similar way. All these common, generic characteristics are shared by many businesses; but there will be a hidden subset of these values that make an organisation unique.

So, the question is what else have you got? We need to dig out the gold that lies in the 1%.

The next question: Does it matter?

Well maybe not. Given these organisations have collective revenues of somewhere around $100bn, they’re clearly doing something right, and I’d be the first to point out that if it ain’t broke, then don’t fix it. And in the dark corners of B2B, it just takes longer for a consciousness of brand to permeate, so maybe we’re just where we are on an evolutionary curve. But that’s not to say that they don’t have a role to play in helping to differentiate one business from another, and to add value over the long term. Not to mention the potentially massive role values can play in shaping the internal brand voice and underpinning the culture.

Clearly, if they’ve been created to simply tick a box and live in a drawer, then fine. You could argue it’s almost pointless having them. But if your CEO is prefacing the annual report with comments about how important the business’s core values are and how they’re building around them; then you’re able to say they have an outsized role to play in helping the business achieve its objectives. And if this is the case, then there’s no excuse for them being poorly conceived and executed. In fact, it’s a massive fail.

How does Good do Values?

At Good we’re clear about how we like to shape meaningful values for a business - ones that cut through and are memorable. For us, there are two little tricks that help us get the job done.

Firstly, we believe in the rule of three. We’re wired to remember things in three, so it makes sense to play to this bias and really focus on the three key values. If there are more than three, then I’d argue they’re not core: they’re peripheral.

Secondly, in order to leverage meaning, memorability and ownability we like to tee up the value with a bit of a descriptor (or a modifier) which turbo-charges the meaning. For example, “straight up honesty” or “down to earth modesty” somehow just sound more relatable, powerful and memorable than their rather dull roots.

To sum up: it’s not surprising that a brand consultancy believes that brand values play an important role. But only if they’re taken seriously, avoiding the generic 99% of “integrity, performance, teamwork and innovation”. Taking the harder route to really lean into the 1% will create a powerful brand foundation and deliver better longer-term dividends.

Why the status quo is the real competition

Even if we offer customers something new, better and cheaper it’s not necessarily the case that they’ll jump at it straight off the bat. There’s a difference between the theory and the practice and I always find it refreshing to have my lazy brand assumpt

Tips for a good brand homepage

One thing we’re always telling clients is that the clarity and coherence of their organisation needs to come through in the first contact with the brand. Often, this first contact comes via a company’s website.

Tips on how to run a brand workshop

I had an experience recently that forced me to boil down the essence of a brand workshop to its constituent parts, so that we could be through it in an hour. This wasn’t particularly easy, given that we usually run these sessions over a half day period.

Better Branding During a Recession

As I sit here in October 2022, it looks like we're heading into a recession.